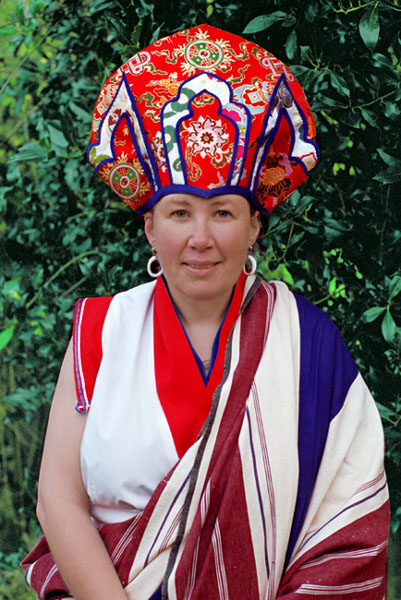 In this photograph Ngakma Nor’dzin is wearing the robes of her ordination – specifically the robes of a ngakma, and of an ordained practitioner who has been given authority to teach. She teaches with her husband and sang-yab, Ngakpa ’ö-Dzin Tridral. In her locality Ngakma Nor’dzin teaches sKu-mNyé and meditation, and hosts the meetings of the Cardiff Vajrayana Buddhist Meditation Group.

Ngakma Nor’dzin and Ngakpa ’ö-Dzin lead a small sangha of apprentices, four of whom have taken vows as ordained disciples (as of 2009). One or more of their apprentice retreats are held at their home, Aro Khalding Tsang, which they generously open in a relaxed way, creating an extended vajra family for the duration. The largest bedroom in their home has been decorated in the style of a Tibetan gompa and has been a place of meditative practice for fifteen years. There is also a retreat hut at the end of the garden of Aro Khalding Tsang which was built by Ngakma Nor’dzin and Ngakpa ’ö-Dzin’s apprentices and disciples on a number of retreats spanning three years. This hut is used for solitary retreat and as extra sleeping space on group retreats.