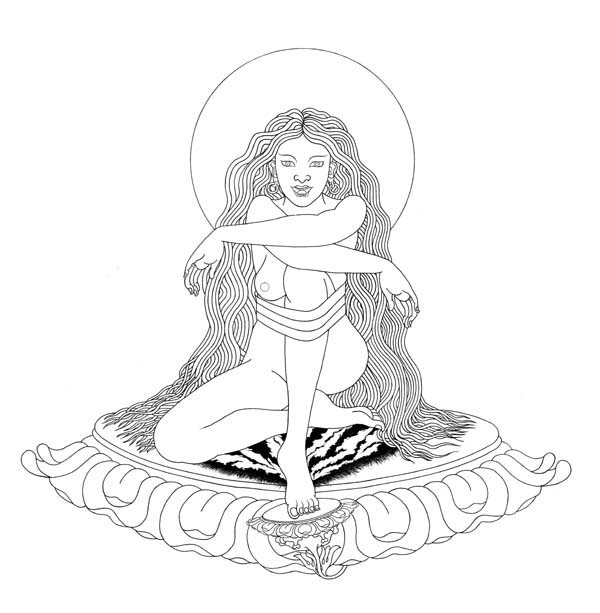 The first line drawing illustration in Spacious Passion, heading the chapter Awakening, is of A-yé Khandro.

A-yé Khandro Tsé-drüp Déchen Lhamo (A ye ’mKha’ ’gro Tshe grub bDe chen lha mo) is an important figure in the history of the Aro Lineage. She was the younger of the two sisters who were the sangyums of Aro Yeshé, the son of Aro Lingma who founded the Lineage. The older sister was called A-shé Khandro. The two girls were childhood friends of Aro Yeshé and they were given all the transmission which Khyungchen Aro Lingma gave to Aro Yeshé.

A-yé Khandro was fond of dogs. Several enormous black mastiffs with red felt collars used to keep her company when she went walking. She had good communication with the dogs, and when she was young she would ride the dogs like little horses. She took after Aro Lingma in terms of her dislike for wearing clothes. She would wander around the Gar naked, even as an adult (as would A-shé Khandro). This was quite accepted at the Gar, because people were used to practising sKu-mNyé and trül-khor (Tantric yogic exercises) together, but also because the two girls were regarded as Dakinis and therefore whatever they did was regarded as an inspiration.